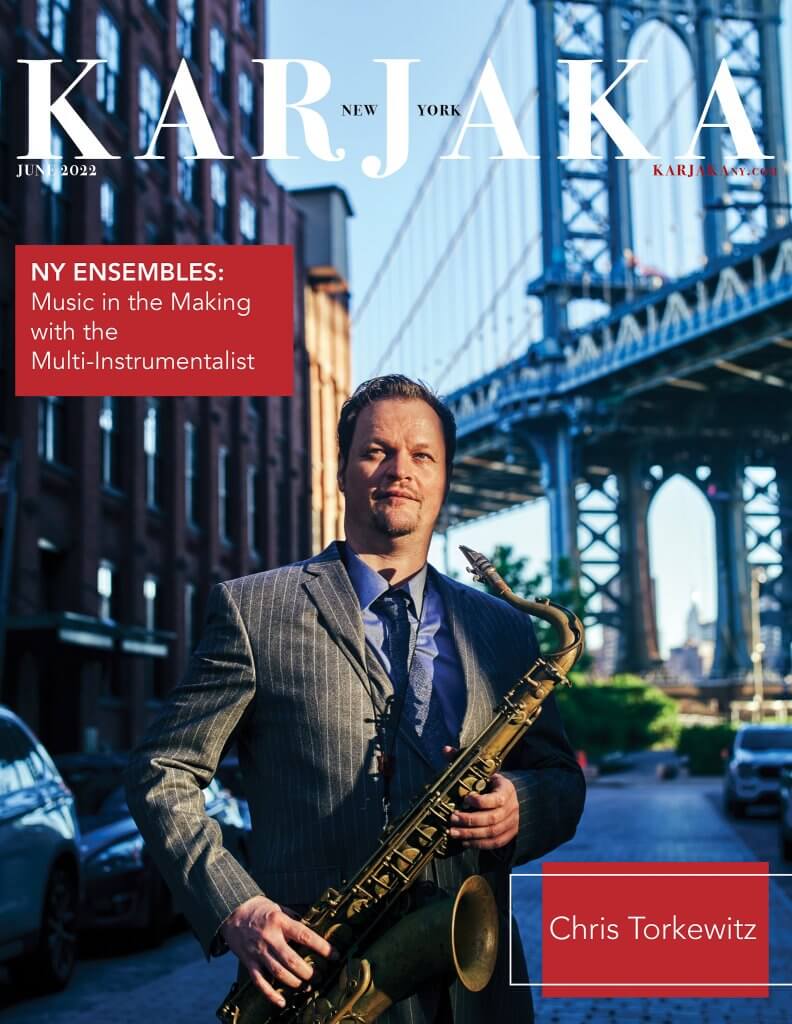 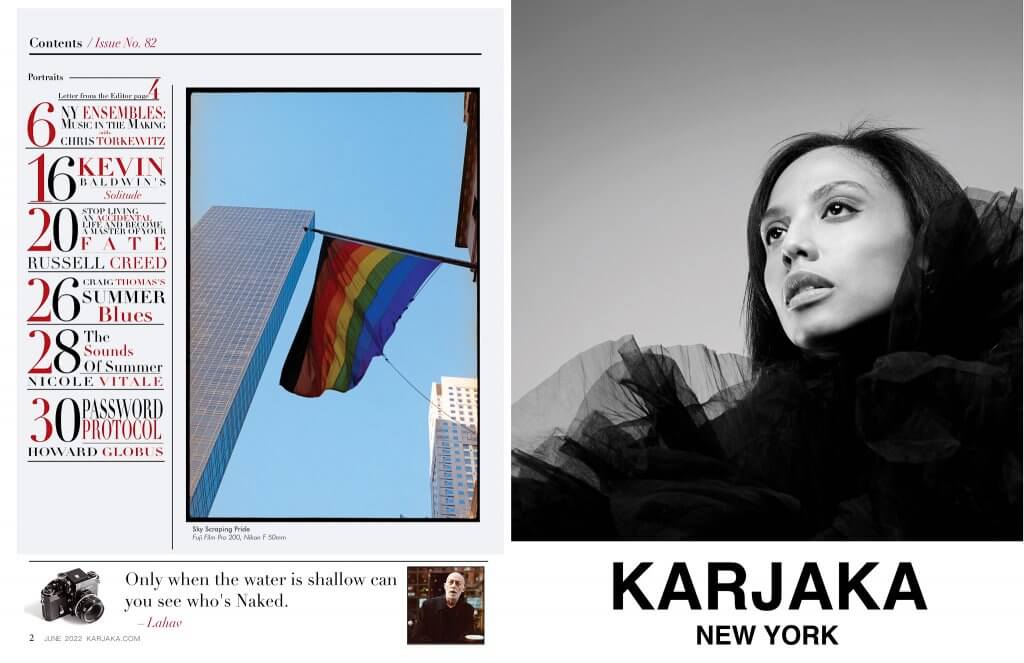 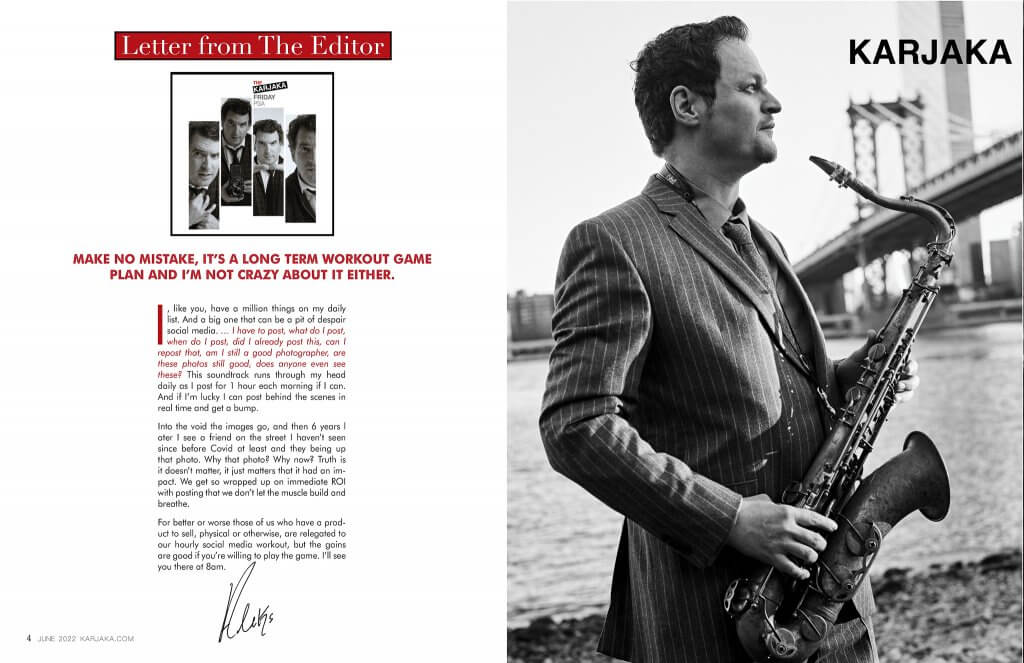 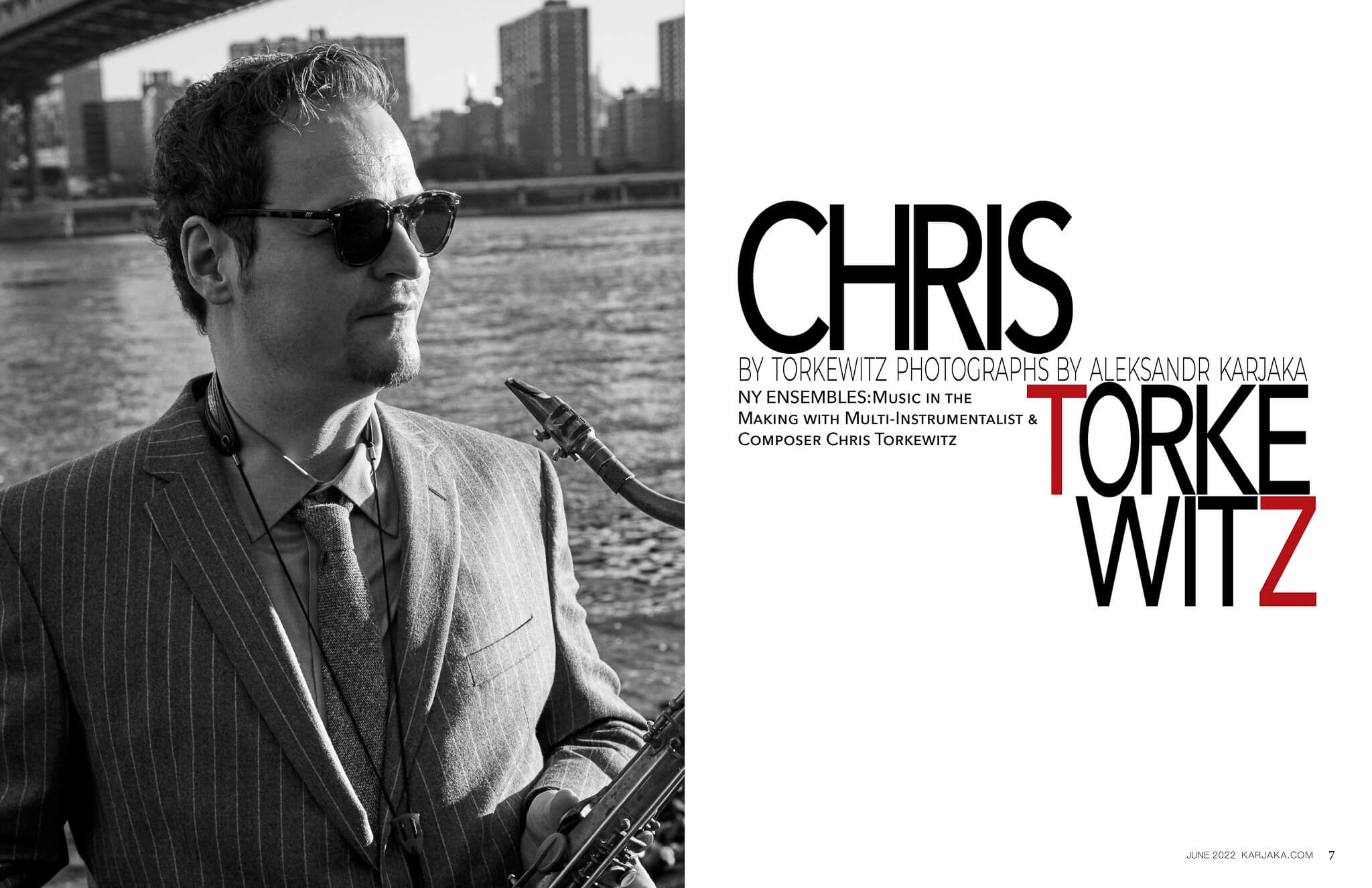 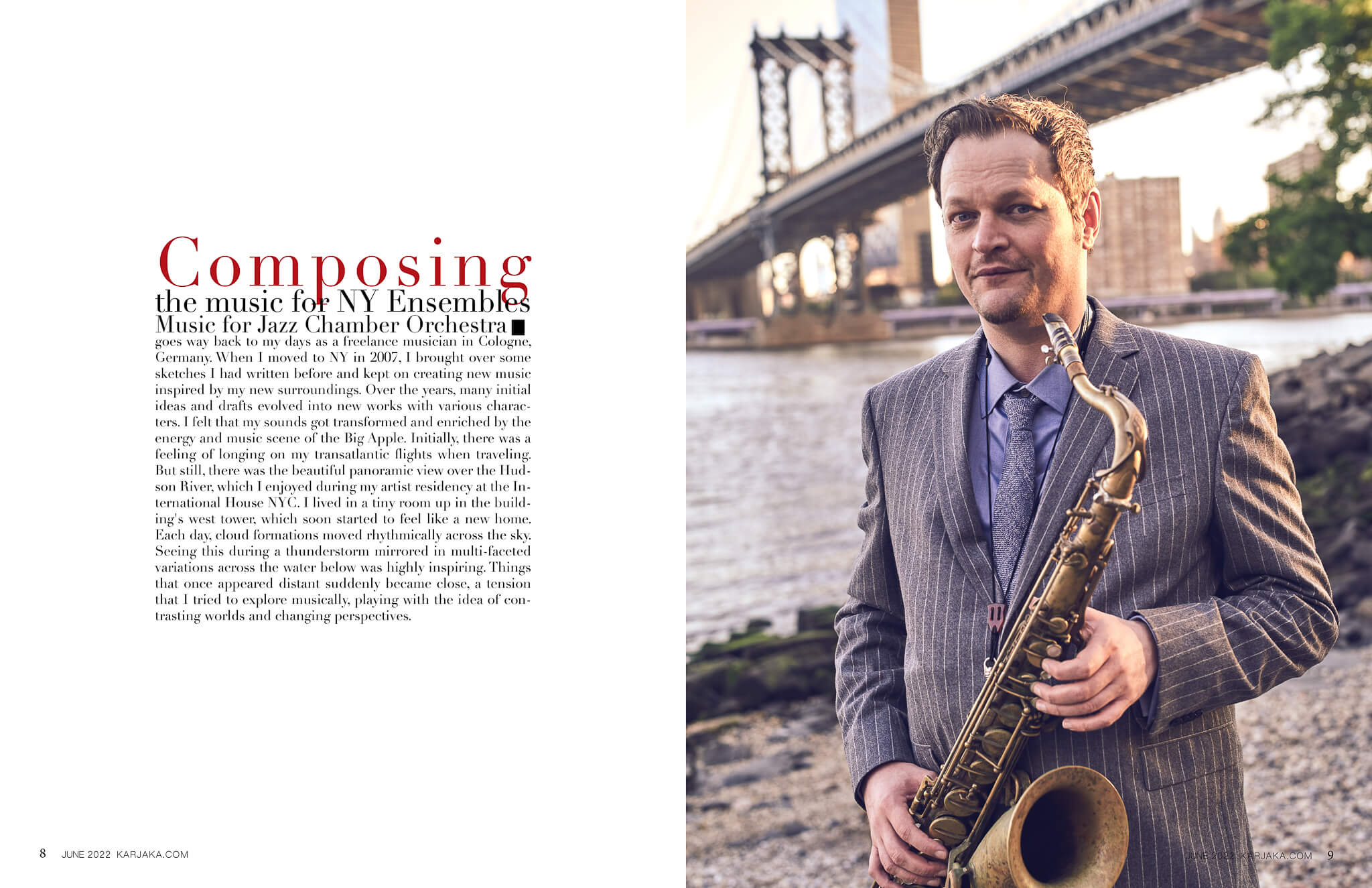 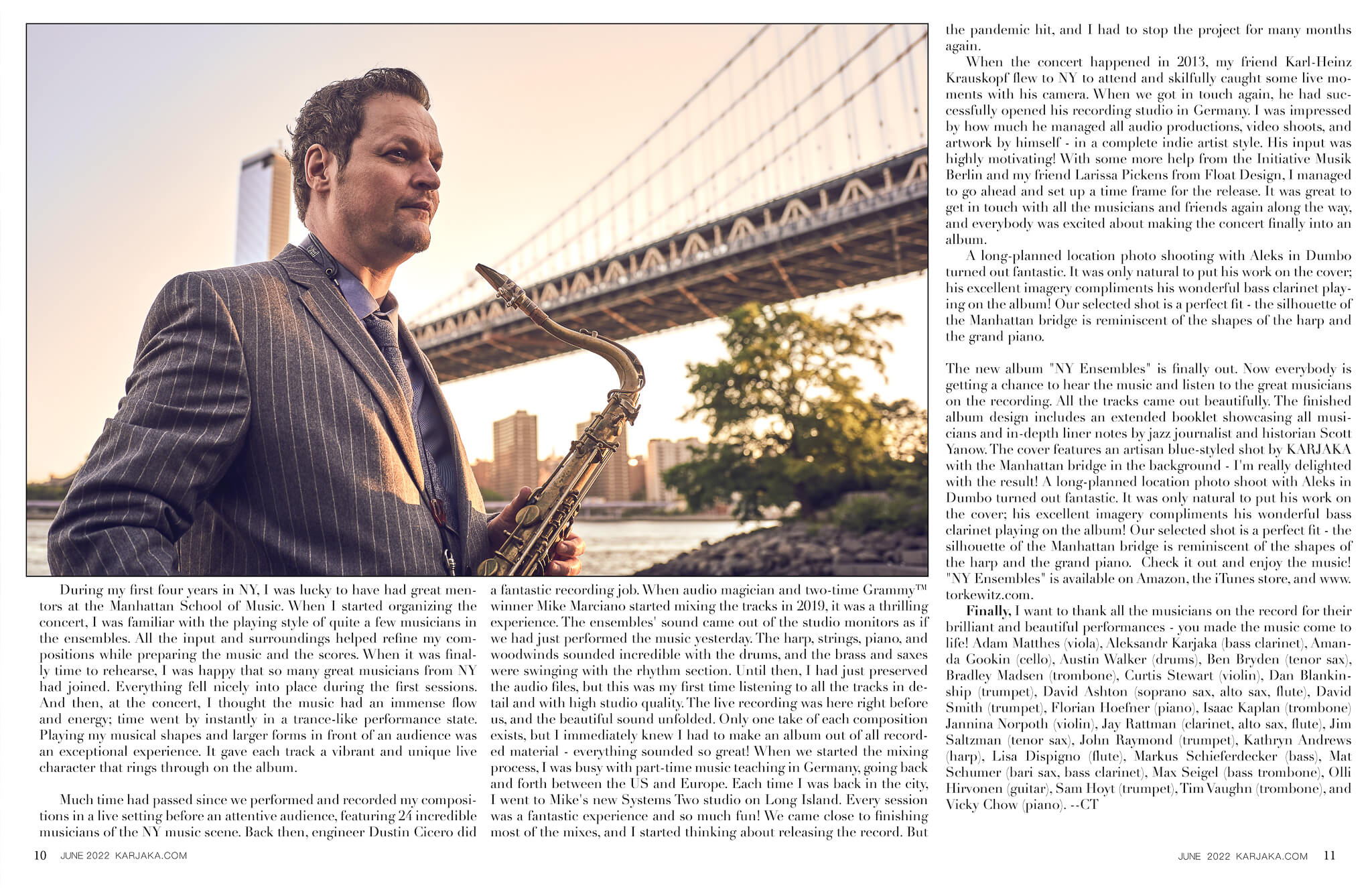 Composing the music for NY Ensembles – Music for Jazz Chamber Orchestra and Jazz Orchestra  goes way back to my days as a freelance musician in Cologne, Germany. When I moved to NY in 2007, I brought over some sketches I had written before and kept on creating new music inspired by my new surroundings. Over the years, many initial ideas and drafts evolved into new works with various characters. I felt that my sounds got transformed and enriched by the energy and music scene of the Big Apple. Initially, there was a feeling of longing on my transatlantic flights when traveling. But still, there was the beautiful panoramic view over the Hudson River, which I enjoyed during my artist residency at the International House NYC. I lived in a tiny room up in the building’s west tower, which soon started to feel like a new home. Each day, cloud formations moved rhythmically across the sky. Seeing this during a thunderstorm mirrored in multi-faceted variations across the water below was highly inspiring. Things that once appeared distant suddenly became close, a tension that I tried to explore musically, playing with the idea of contrasting worlds and changing perspectives.

During my first four years in NY, I was lucky to have had great mentors at the Manhattan School of Music. When I started organizing the concert, I was familiar with the playing style of quite a few musicians in the ensembles. All the input and surroundings helped refine my compositions while preparing the music and the scores. When it was finally time to rehearse, I was happy that so many great musicians from NY had joined. Everything fell nicely into place during the first sessions. And then, at the concert, I thought the music had an immense flow and energy; time went by instantly in a trance-like performance state.

Playing my musical shapes and larger forms in front of an audience was an exceptional experience. It gave each track a vibrant and unique live character that rings through on the album.

Much time had passed since we performed and recorded my compositions in a live setting before an attentive audience, featuring 24 incredible musicians of the NY music scene. Back then, engineer Dustin Cicero did a fantastic recording job. When audio magician and two-time Grammy™ winner Mike Marciano started mixing the tracks in 2019, it was a thrilling experience. The ensembles’ sound came out of the studio monitors as if we had just performed the music yesterday. The harp, strings, piano, and woodwinds sounded incredible with the drums, and the brass and saxes were swinging with the rhythm section. Until then, I had just preserved the audio files, but this was my first time listening to all the tracks in detail and with high studio quality. The live recording was here right before us, and the beautiful sound unfolded. Only one take of each composition exists, but I immediately knew I had to make an album out of all recorded material – everything sounded so great!

When we started the mixing process, I was busy with part-time music teaching in Germany, going back and forth between the US and Europe. Each time I was back in the city, I went to Mike’s new Systems Two studio on Long Island. Every session was a fantastic experience and so much fun! We came close to finishing most of the mixes, and I started thinking about releasing the record. But the pandemic hit, and I had to stop the project for many months again.

When the concert happened in 2013, my friend Karl-Heinz Krauskopf flew to NY to attend and skilfully caught some live moments with his camera. When we got in touch again, he had successfully opened his recording studio in Germany. I was impressed by how much he managed all audio productions, video shoots, and artwork by himself – in a complete indie artist style. His input was highly motivating! With some more help from the Initiative Musik Berlin and my friend Larissa Pickens from Float Design, I managed to go ahead and set up a time frame for the release. It was great to get in touch with all the musicians and friends again along the way, and everybody was excited about making the concert finally into an album.

A long-planned location photo shooting with Aleks in Dumbo turned out fantastic. It was only natural to put his work on the cover; his excellent imagery compliments his wonderful bass clarinet playing on the album! Our selected shot is a perfect fit – the silhouette of the Manhattan bridge is reminiscent of the shapes of the harp and the grand piano.

The new album “NY Ensembles” is finally out. Now everybody is getting a chance to hear the music and listen to the great musicians on the recording.

All the tracks came out beautifully. The finished album design includes an extended booklet showcasing all musicians and in-depth liner notes by jazz journalist and historian Scott Yanow. The cover features an artisan blue-styled shot by KARJAKA with the Manhattan bridge in the background – I’m really delighted with the result! A long-planned location photo shoot with Aleks in Dumbo turned out fantastic. It was only natural to put his work on the cover; his excellent imagery compliments his wonderful bass clarinet playing on the album! Our selected shot is a perfect fit – the silhouette of the Manhattan bridge is reminiscent of the shapes of the harp and the grand piano.  Check it out and enjoy the music! “NY Ensembles” is available on Amazon, the iTunes store, and www.torkewitz.com.

Finally, I want to thank all the musicians on the record for their brilliant and beautiful performances – you made the music come to life!

"All things considered, they make NY Ensembles among the best of this year’s new jazz albums." 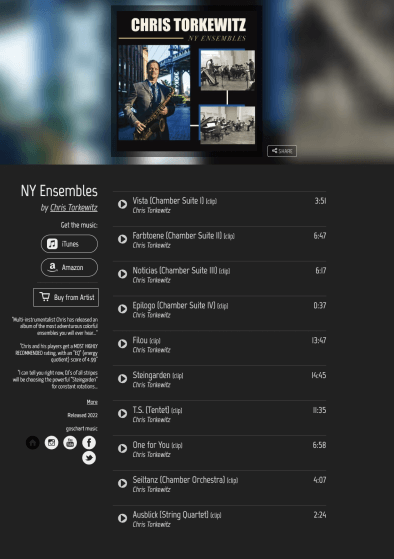 "Chris and his players get a MOST HIGHLY RECOMMENDED rating, with an “EQ” (energy quotient) score of 4.99"

We noticed you're visiting from Germany. We've updated our prices to Euro for your shopping convenience. Use United States (US) dollar instead. Dismiss